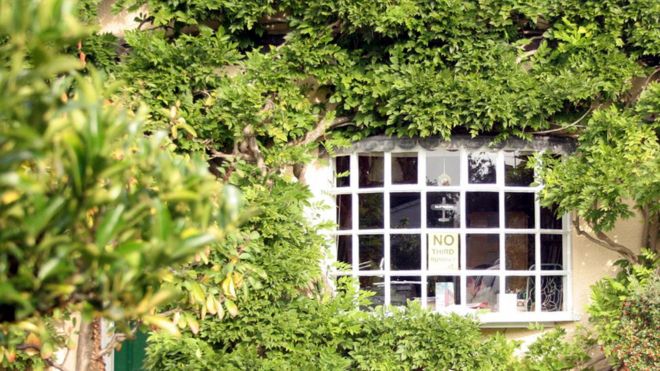 The construction of a third runway at Heathrow Airport will lead to one village being completely flattened and others partly demolished. Now that the favoured plan for the airport expansion has finally been announced, how are the people living in the area coping?

The people of Harmondsworth are tired, they say. Worn out. Exhausted. Drained. They have been in limbo, not knowing whether their homes are to be demolished. Or whether they will be living on the edge of a runway.

At least they now know what to expect. They can prepare. If they have the energy.

Of course, it’s not over yet. There will be legal challenges and a public inquiry. But not many residents seem to have the stomach for it.

Half of Harmondsworth will disappear. The other half – including a 600-year-old, Grade I-listed barn and the 11th Century St Mary’s Church – will be metres from the hot roar of planes leaving the tarmac. 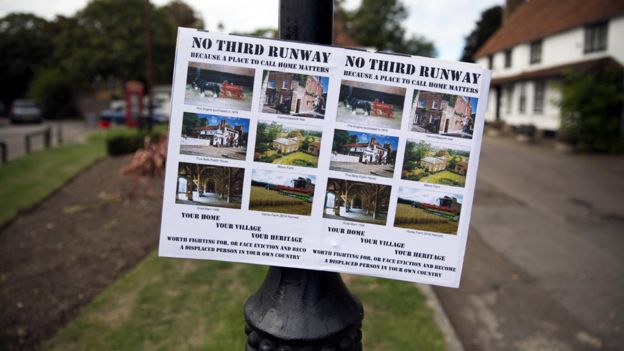 The approach to the village, currently about two miles from the airport, is flanked by lampposts. On each pole a green sign has been attached with cable ties. White lettering proclaims: “Stop Heathrow expansion”.

On entering the settlement, it could be mistaken for any leafy suburb or commuter village, but for a while it looked as though Harmondsworth’s historical heritage would offer the village a lifeline.

Built in 1426 by Winchester College as part of its manor farm, the cavernous barn was dubbed “the Cathedral of Middlesex” by poet laureate Sir John Betjeman.

The importance of the structure meant there was an early victory – of sorts – for protesters.

Original plans included the demolition of the barn and church. Campaigners managed to save them from the bulldozers, but rather than being abandoned, runway plans were simply shifted a few metres.

Mrs Bailey, the local custodian of the barn who admits visitors on behalf of English Heritage, says describing the buildings as “saved” is “nonsense” as they will be bordering one of the world’s busiest runways.

She’s unconvinced people will visit when the airport is expanded. Despite being an active campaigner against the third runway, she too is exhausted at the thought of carrying on with her activism.

“We’ve been on the edge of our seats now for more than 20 years,” she says.

“The Stop Heathrow Expansion group has taken over a large proportion of my life, at least two full days a week. To be honest, I had other plans for my retirement.”

The village – the main street with a couple of pubs and shops and old red telephone kiosk on a small green – is pretty in an understated way. It’s not spectacular and neither is it perfectly chocolate-boxy.

Flowers have been planted in communal areas, people obviously take a pride in their hanging baskets. The streets are clean and the recreation ground near the primary school is well-maintained.

Houses vary between imposing brick buildings and more modest council-owned homes, but most have one thing in common – stickers and posters are displayed in windows protesting against the runway.

Everybody in Harmondsworth has an opinion about the airport extension. Some, like Andy Perrett, are pretty pleased. He owns his own home and is set to make a substantial sum when it is compulsorily purchased.

Standing outside the Five Bells pub, enjoying a drink and smoke after work, he grins: “Bring it on, is what I say.” He has lived in Harmondsworth for 54 years, moving there with his family when he was four.

“Years ago I was against the expansion, my parents lived here and my grandparents before them. But I realised the small people don’t win so there’s no point fighting. Give me the money and I’ll go.

“This country means nothing to me now. I’m going to retire and move to France. It’s not my problem.”

It is an attitude that does not sit well with Caroline Cowley, who has been in Harmondsworth for 32 years, raising two sons.

But then, Mrs Cowley does not own her own home and will have to move wherever the council tells her.

She will get financial help for the move, but that is it.

Shooting a sour glance at Mr Perrett, clearly an old sparring partner, she draws on a cigarette. “It’s not just about me,” she says. “It’s the old folk round here. Elderly people have lived here all their lives. But what can you do?”

She has not always been so phlegmatic.

“I was fighting against the expansion all the time, but all the anxiety, the stress, it got too much. It’s going to happen, so why put myself through all that grief?”

While the airport’s boundary will engulf half of Harmondsworth, nearby Longford will completely disappear.

It is not quite as “villagey” as Harmondsworth, partly because of a few faceless behemoth airport hotels at the end of the street – and the fact planes coming in to land loom disproportionately large over the housing estates. It’s also strung out along the main road with no central focal point.

Another factor that marks it apart from Harmondsworth is the large number of foreign nationals. Asylum seekers from Iran, Sudan, Eritrea and Syria are temporarily accommodated there.

It means, along with travellers staying at the airport-shuttle serviced hotels and lodges, there is a largely transient population who are not in Longford long enough to help build a sense of village community.

One resident, who did not want to be identified, says the influx of migrants into cheap accommodation was a “plan” to “run Longford down”.

“They’ll make it a less nice place to live and then no-one will complain when they knock it down,” she says.

In the White Horse, a 17th Century pub, few of the punters are locals. Few are even British.

A pair of South African businessmen perch at the bar, while a backpacker from Sweden flirts with an American youth in the corner.

Someone popping in for a quick drink is Jim Keane. He is staying at the nearby Premier Inn and fancies what he calls “a proper pint”.

Mr Keane does not have a problem with Heathrow expanding. “It’s progress, isn’t it?,” he says. “I live in a nice little village near Warwick, and I wouldn’t like it to be wiped out – but someone’s always going to be unhappy.

“It’ll be good for Britain, especially after Brexit and all that. We have to be practical. A few hundred people will lose their homes or whatever, but think of all the people that will benefit.”

A Longford resident who does not agree is Marco De Pra. He is an engineer who works at Terminal 5. His house, surrounded by the local duck-bearing river, will be demolished.

“I don’t know where I’d move to,” he says. “I divorced recently, and now I’ll lose my home. It’s like I’m losing everything.

“The money from the house won’t be enough to let me buy somewhere as nice. I love my home. I don’t know where I’d go.”

What are local people being offered?

How close a property is to the new runway determines how much compensation residents will be offered.

Owners of about 750 properties in Longford and parts of Sipson and Harmondsworth are covered by the compulsory purchase area scheme (shown in dark blue in the map below) – which offers 25% above market value plus legal fees and stamp duty and moving costs for anyone whose home will be compulsorily purchased.

About 3,750 homeowners in Poyle, Colnbrook, Brands Hill, Harmondsworth, Sipson, Harlington and Cranford Cross (in the lighter blue area) will be offered the choice of either staying in their homes next to the new runway – or selling up at 25% above market value once the runway has been built.

The government says people who choose to remain in the affected areas can have their homes insulated against noise, community buildings such as schools will be noise-insulated and specially ventilated and there will be a six-and-a-half hour ban on scheduled overnight flights.

John McCarthy, who moved to Harmondsworth because of its rural feel, says the development is “diabolical”.

Harmondsworth is a proper village, he says, “just like in Heartbeat off the TV”.

But he, along with many others, fears the new runway will still the heartbeat of Harmondsworth.

“It’s not just a place, it’s a community. And the community will be ripped apart.

In years to come, long after the bulldozers have left and planes are thrumming overhead, what will remain of Harmondsworth?

An old barn no-one visits? Edge-of-the-runway homes that will never be quite soundproofed enough?

And memories of a time when the community thought fighting against Heathrow’s expansion could succeed.

A time before they were all just so tired.