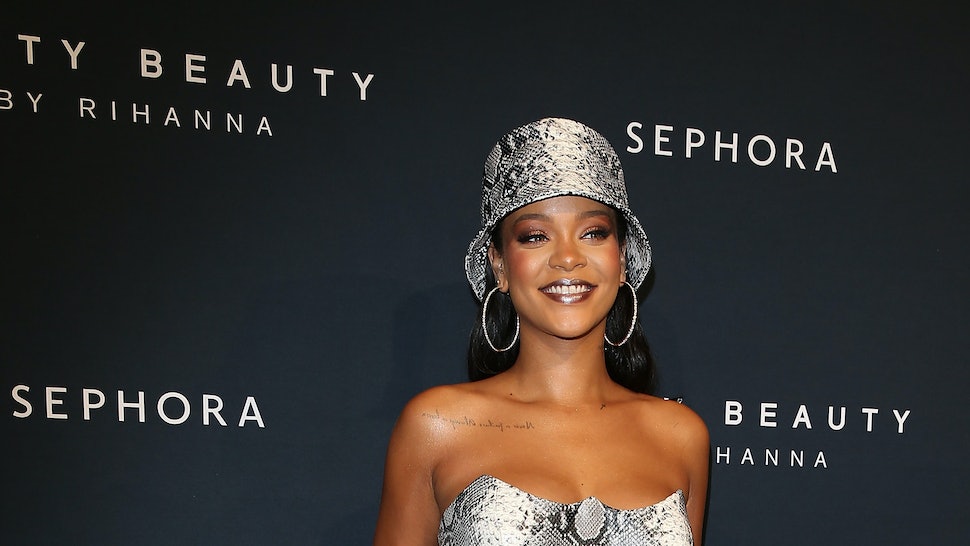 Everything that Rihanna touches turns to gold, and now the artist turned beauty and fashion mogul is setting her sights on luxury fashion. WWD announced that Rihanna is reportedly launching a luxury house under her name, and teaming up with LVMH Moët Hennessy Louis Vuitton in order to do it.

There has been much buzz in the fashion world this week when Rihanna stepped out wearing mysterious gold plated shield sunglasses with the Fenty logo stamped onto one of the arms, making fans speculate if she was test driving a new fashion prototype. That wouldn’t be out of the box for her — after all, the nine time Grammy winner owns a lingerie line, is the creative directer at Puma with her Fenty X Puma division, and has been known to collaborate with multiple labels and brands for capsule collections, so designing shades wouldn’t be too out of left field. In fact, she created a range of futuristic sunglasses for Dior in 2016, which took on a similar shield silhouette.

She is also known to test drive her products secretly while flaunting them in plain sight, where most famously she wore the Killawatt Foil Highlighters to the 2017 Met Gala and no one was the wiser. But who could have guessed that what the shades represented weren’t just a mere collaboration, but a whole new luxury house?

15 people are talking about this

“LVMH Moët Hennessy Louis Vuitton and the music sensation have been in secret discussions to launch a luxury house under her name. That would make it the first fashion brand industry titan Bernard Arnault has launched from scratch since Christian Lacroix in 1987,” WWD reported.

LVMH has already reportedly assembled a team of employees to work with Rihannain launching this project, many of them coming from labels like Louis Vuitton and Celine, giving you an idea just how “luxury” this luxury label is going to be. Basically, start saving your paychecks now.

While this new venture is ambitious, it’s not altogether too surprising. Rihanna has become a powerhouse in the fashion industry, where she has become the first woman to win the ‘Shoe of the Year’ Award at the Footwear News Achievement Awards, which has been around for 30 years. She was also chosen as one of Anna Wintour’s cohosts for last year’s Met Gala, alongside with Amal Clooney and Donatella Versace.

While there aren’t many official details about the label yet, outlets are reporting that her collections will span ready-to-wear, leather goods, and accessories, and might be released in sync with her ninth album. If that is the case, then we can expect to see a Rihanna label up and ready by the end of this year.

It’s been almost three years since Rihanna has dropped an album, and she had recently confirmed that 2019 will be the year that we get new tracks. (The confirmation happened underneath a Fenty Beauty Instagram post no less, where a fan asked if she had time to make music while busily juggling all of these other fashion and beauty ventures in between.)

But if someone is able to become a mogul in fashion, beauty, and music, it would most definitely be Rihanna. Now all we have to do is wait patiently to see what this new luxury label will bring forth.