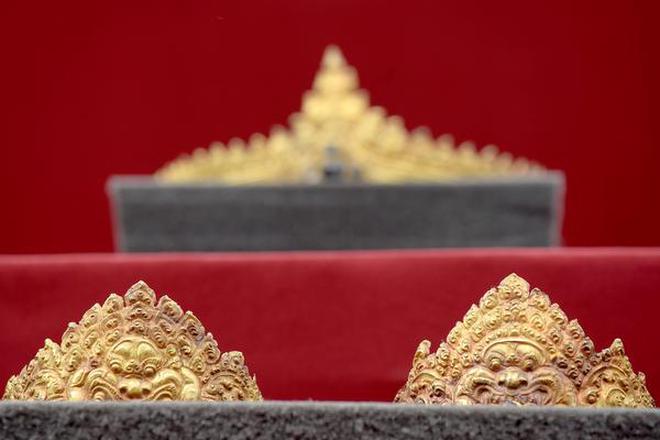 A set of ancient Angkorian gold jewellery was returned to Cambodia on Saturday with an elaborate procession through the capital, decades after the precious pieces were looted from a famed jungle temple.

The 10-piece set, which includes a crown, earrings, armbands and a chest ornament, was stolen from Cambodia’s Angkor Wat temple during the kingdom’s civil war in the 1970s and was discovered in the online catalogue of a London art dealer last year.

The items are believed to date back to the Khmer Empire, a once-mighty dynasty that sprawled much of modern-day Cambodia, Thailand, Vietnam and Laos between the 9th and 15th centuries.

After the pieces turned up in Britain, the Cambodian government lobbied for their return and with the help of specialists spent more than a year inspecting the items to make sure they were genuine.

Officials proudly welcomed the jewellery back to the country on Saturday as the items were accompanied from the airport by hundreds of people and flanked by security guards.

“This is a successful mission of all Cambodians, including diplomats and people who love the arts and antiques. Everyone is happy,” said Chuch Phoeun, Secretary of State at Cambodia’s Ministry of Culture and Fine Arts. He said the ornaments are believed to have been pillaged during Pol Pot’s genocidal Khmer Rouge regime, though the exact date is not known.

London’s Jonathan Tucker Antonia Tozer Asian Art dealership agreed in April to return the jewellery, which will now be appraised by experts in Cambodia.

The pieces will soon be designated as national heritage items.