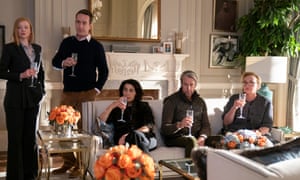 This season’s TV style icons are a bunch of pampered billionaires who crush members of their own family for professional advancement. If Sex and the City’s Carrie Bradshaw is the ultimate small screen fashion plate, they are her opposite. They do not dress with creativity or exuberance. They operate in a world of beige cashmere blanket wraps and grey cable-knit cardigans.

They are the Roy clan, of cult show Succession, which reaches its finale on Sky Atlantic on Monday. Succession is not a show about fashion – it is about the brutal machinations of a Murdoch-like media dynasty – but it uses clothing to witty and devastating effect. The look is a stealth wealth materialised: Savile Row suits, silk shirts, well-cut wool trousers. Fabrics are luxurious and fit is impeccable. Logos and embellishments are seldom present.

“Each one is drawing attention to themselves in a different way through their clothing, which is the way we are as humans,” says the show’s costume director Michelle Matland. “We present ourselves the way we want to be seen.”

Succession is brilliant at demonstrating the tribal nature of clothes. Tom Wambsgans, who occupies the precarious position of being an in-law, rather than a Roy blood relative, unwittingly reveals his insecurities by trying too hard. “His ties match his pocket square. His shoes are a little shinier than they need to be,” says Matland. In one excruciating scene the Roy clan accuse him of dressing like a “divorce attorney from the Twin Cities”. Second son Kendall Roy tries and fails to woo a hip young tech agency by wearing some jazzy Lanvin trainers of which he explains, I thought “you’d all be dressed like fuckin’ Bjork, and I wanted to make an impression”.

Those Lanvin trainers are a punchline, as are the Moncler padded vests the family wear to blend in at a tech retreat (an aesthetic inspired by the media and tech mogul-packed annual Sun Valley Conference). The Roys “have been brought up in a very European sensibility”, says Matland. “They were trained in how to behave and also how to dress. I think there is a decorum about that.” Using logos to display status is something the Roy clan are generally above.

The Succession character most beloved by the fashion industry is Shiv Roy, the only female Roy sibling, who has been named a key style inspiration for autumn by Elle and Man Repeller. Shiv’s look, which sharpened up in series two as a reflection of her quest for power, mainly comprises of wide legged trousers, inspired by Katharine Hepburn and Marlene Dietrich, and bought from Armani, Ralph Lauren and The Row. She also wears a lot of turtleneck jumpers.

“Shiv is not a woman who delves into Vogue magazine,” Matland says. “But she is extremely tactical and knows what’s right for her and beelines for it.” Shiv’s simple, achievable, eminently copyable look mirrors a lot of what is happening on the catwalk, as fashion brands seek to serve women tired of daft trends and pointless accessories. Little wonder that the fashion press hang on her every pair of trousers.

The rest of the family’s fashion choices are often far from successful, despite their clothes’ price tag. Logan Roy, for example, wears a brilliantly tasteful, plain baseball cap which, says Matland, is his “barrier” against the paparazzi. But his suits never quite fit over his paunch despite being made to measure. The shawl collar cardigans he prefers to wear around the house could be read as a nod to his vulnerability and advanced age. They show that “in his private world, because he has no one to impress, he does not need to posture”, says Matland. Paired with spectacles, with a cord attached, the effect is very King Lear.

Mainly, Succession is far from aspirational viewing. These people are rich as the gods but – Shiv’s trousers aside – we would not want to dress like them. That’s what makes Succession’s fashion so fascinating. They cannot hide their true selves, even with their limitless budgets.