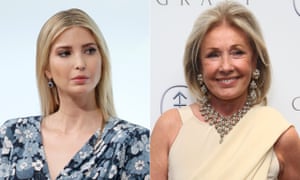 Seriously? That’s quite impressive for a woman of 72. Sorry. To be clear, it’s Vittadini’s clothes that look exactly like Ivanka Trump’s.

This Vittadini character had better be careful. The US president enjoys attacking his daughter’s business enemies on Twitter. She had better be careful anyway, if she’s ripping off other people’s designs. I never said she ripped anyone off. The truth is something much more mysterious.

I’m listening. On Monday, it was reported that Ivanka Trump apparel was beingsold with an “Adrienne Vittadini Studio” label in the US discount chain Stein Mart. The company that makes Trump’s clothes under licence, G-III, then admitted it had been responsible for relabelling the items.

So now even the people who paid to use Ivanka Trump’s name are secretly removing it? Yes, although we don’t know why. Apparently, it is common to remove or replace labels on high-end fashion items that don’t sell, in order to prevent the brand being seen in discount stores.

Inexpensiveness! Ugh! Exactly. Stein Mart says the relabelling was not political, but the chain has carried both Trump and Vittadini brands “for a while”, according to its boss, D Hunt Hawkins, which makes you wonder why the Trump stuff would only be disguised now.

Hmmm. For its part, G-III says Ivanka Trump and her company knew nothing about it. “G-III has already begun to take corrective actions,” it said in a statement, “including facilitating the immediate removal of any mistakenly labelled merchandise from its customer.”

I see. What does Vittadini say about it? Nothing yet, but she doesn’t own the brand any more, so it probably has nothing to do with her. Authentic Brands, which manufactures under license from Vittadini, aren’t talking either.

How strange. Are you sure that Adrienne Vittadini is a real person? Absolutely. She had a long career in fashion with her husband and business partner, Gigi. “I want to create excitement,” told the New York Times in 1988. “Clothes have to say, ‘Take me away!’”

Not, “Take me away and facilitate the removal of any mistakenly labelled merchandise”? Er, no.