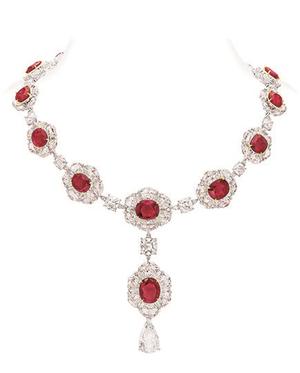 Designed by Nirav Modi, the set has specially-procured rubies

Well-known diamond jewellery designer Nirav Modi has designed a jewellery set priced at ₹105 crore (over $16 million). Studded with specially-procured rubies from the Mogak mines in Myanmar and fine-cut diamonds from across the world, the set is believed to be one of the costliest ever made in India.

The Gem and Jewellery Export Promotion Council (GJEPC), however, does not keep individual jewellery piece data and declined to comment.

It took five years to source the rubies for this set called the Mogok Ruby Suite, which comprises a necklace, a pair of earrings and a bracelet. It took two years for Mr. Modi and his team to manufacture this at the company’s facility in Mumbai.

“It was completed just two months back. It has been designed by me and manufactured here at our facility at Kurla in Mumbai. It is completely made in India,” Nirav Modi, founder and creative director Nirav Modi chain of diamond jewellery retail stores and Chairman of Firestar International said.

Firestar International is the parent of Nirav Modi chain, which has stores in key markets across the globe.

Asked whether the set has been ordered by some customer, Mr. Modi said, “I have created this over a period of time and based on my own imagination. We will find a buyer.” The set has 27 Mogak rubies weighing 71.11 carats and is made of finest of diamonds of D, E, F colour weighing 128.56 carats.

Incidentally, Mr. Modi is the first jewellery designer from India whose creation had been auctioned at Christie’s.

In 2010, when Mr. Modi started his first private salon, he wanted to introduce it through a big bang unveiling.

“We had developed a Hero piece. Christie’s came to know about it and urged me to put it on auction and it fetched ₹16 crore then. It had a base price of ₹12 crore and witnessed aggressive bidding.”

Mr. Modi said every single piece of jewellery sold at the stores were designed by him. The price starts from ₹2 lakh onwards. The ₹105 crore set is the costliest one ever produced by him.

Mr. Modi, who set up its first retail store at Defence Colony, New Delhi in 2014, has now 15 stores, including three in India.